How to Speak English Like a Native: 5 Practical Tips

Do you ever get jealous of chameleons?

You know—those colorful reptiles that can blend in anywhere.

They just shift their colors, and, poof! They look exactly like the tree they’re climbing or the rock they’re sitting on.

Wouldn’t it be great to be a language chameleon?

Life would be so much easier if we could just shift our accents, vocabulary and grammar to sound exactly like native English speakers.

Well, we can dream…

In the meantime, if you want to speak English like a native, you’ll have to put in some hard work. But it might not be as hard as you think.

There are practical steps you can take to sound more fluent, and more like a native, from your pronunciation to your word usage.

With these tips, plus patience and practice, you’ll be a language chameleon in no time. 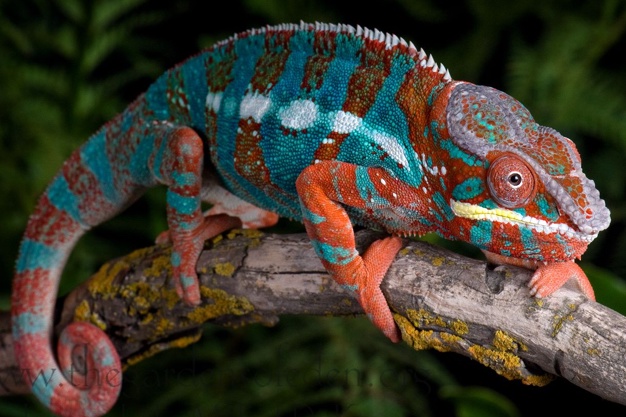 Why Learn to Speak English Like a Native Speaker?

A native level of English speaking is difficult to obtain. In fact, some people will tell you it’s not possible if you start learning after childhood. Whether that’s strictly true is up for debate.

Regardless, language students put years and years into perfecting their speaking skills so they can talk like a native speaker.

What’s all that time for?

The perfectionists want to excel at whatever they do. Others understand the potential benefits of sounding like a native speaker:

Be better understood by native speakers: The more you speak like a native speaker, the easier it is for the locals to understand you. You can worry less about misunderstandings.
If you have to use English every day, life would be much easier this way, wouldn’t it?

Be more confident using English at work: By the same token, if you have to use English at work, you’ll be much more confident if you sound like a native speaker.
It’s not just about the language skills, but also the dedication and hard work required to get there. By becoming a native-sounding speaker, you’ll show your colleagues that you know how to get results.

Get jobs requiring native-level English: More doors are open to you if you can speak English like a native speaker. Jobs that require a native level of English will be available to you and the few people who reach the same level as you. The competition is less fierce and highly skilled jobs often pay more. 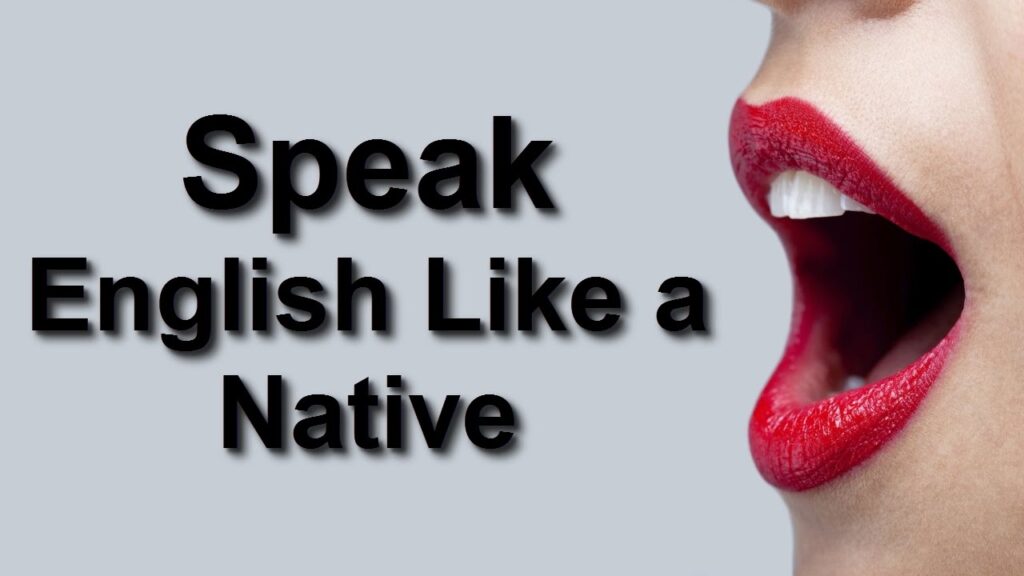 5 Tricks to Help You Speak English Like a Native.

If you want to learn to speak English like a native speaker, focus on the following four areas:

1. Get Familiar with Different English Accents

There are many different accents among native English speakers. Someone from New York sounds different from someone who grew up in Texas.

And of course, you must have heard the Queen’s English (the standard English of Britain). I’ll tell you right now that not everyone there sounds like their queen. Then there are the Scots, Welsh and Irish who speak English with different accents.

Here’s a fun thing to do. Go to YouTube and search for videos of people trying to do different English accents. Not all are good (or correct) but they’ll give you an idea of how many English accents there are. Here’s a good example you can start with.

Done with the fun? Now back to business!

What kind of accent do you want to have? Think about the regions you want to travel to and the cities you’d like to work in. This is pretty important to decide as it will make your study and practice more focused.

Do you want to sound like a New Yorker? That’s fine, but when you look for a TV show to watch, pick “Friends” instead of “Twin Peaks.” Stay focused.

With that’s in mind, let’s move on to improve your pronunciation with the following tips:

Okay, so now you have a basic idea of different English accents. But how do you go about actually learning native pronunciation?

One great place to start is watching and imitating authentic English videos. These will expose you to real English pronunciation and speaking styles. They also give you the chance to study the speakers’ mouth and lip movements so you can imitate them.

There are tutorial videos (e.g. BBC Pronunciation or Rachel’s English) and software (such as Tell Me More) that show you the English lip and tongue positions for every letter of the alphabet and all the combinations.

I know learning them is tedious, but it’ll help you pronounce words correctly, especially the ones with sounds that don’t exist in your native tongue.

So learn them and practice in front of the mirror. Do it again and again until it becomes muscle memory. You can even try recording yourself to assess your progress!

Watch how your mouth and lips move and see if you make a mistake or struggle with any particular words. Repeat the difficult words until the movements of your mouth feel natural.

“FluentU” is a great source for authentic videos you can use to learn pronunciation.

Unlike traditional apps, FluentU uses a natural approach that helps you ease into the English language and culture over time. You’ll learn English as it’s spoken in real life.

FluentU has a variety of engaging videos like popular talk shows, music videos, and funny commercials, as you can see here: 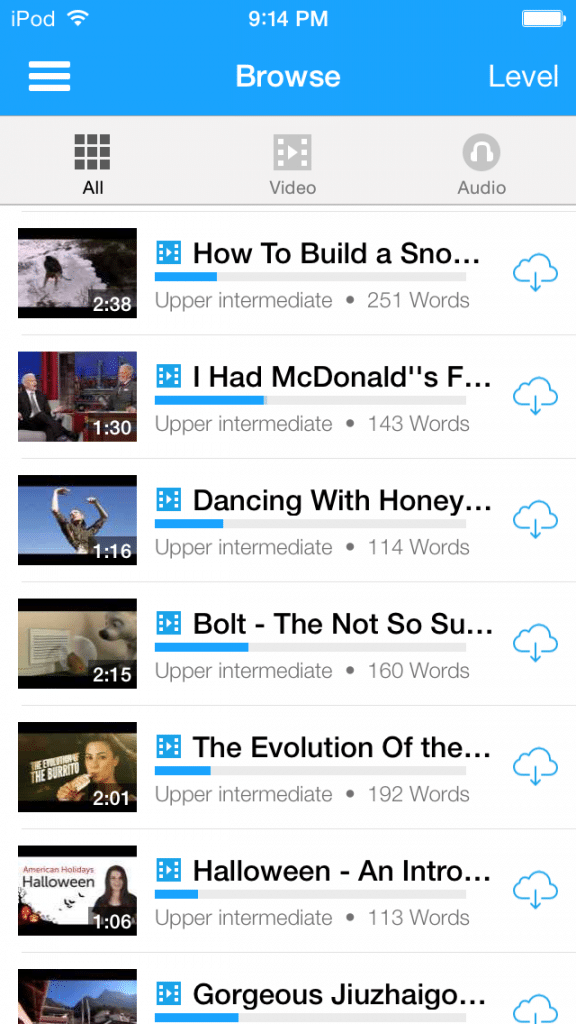 “FluentU “ makes it easy to watch English videos because it has interactive captions. That means you can tap on any word to see an image, definition, and useful examples.

Learn all the vocabulary in any video with quizzes. Swipe left or right to see more examples for the word you’re learning.

For example, when you tap on the word “brought,” you see this: 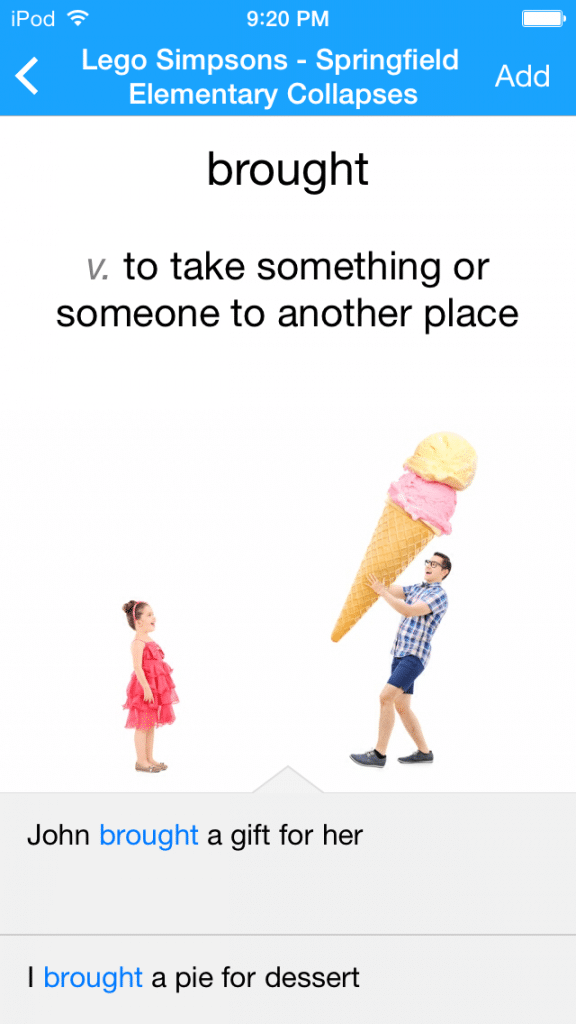 The best part is that “FluentU” keeps track of the vocabulary that you’re learning and recommends you examples and videos based on the words you’ve already learned.

Every learner has a truly personalized experience, even if they’re using the same video.

You can start using “FluentU” on the website with your computer or tablet or, better yet, download the app from the iTunes or Google Play stores. 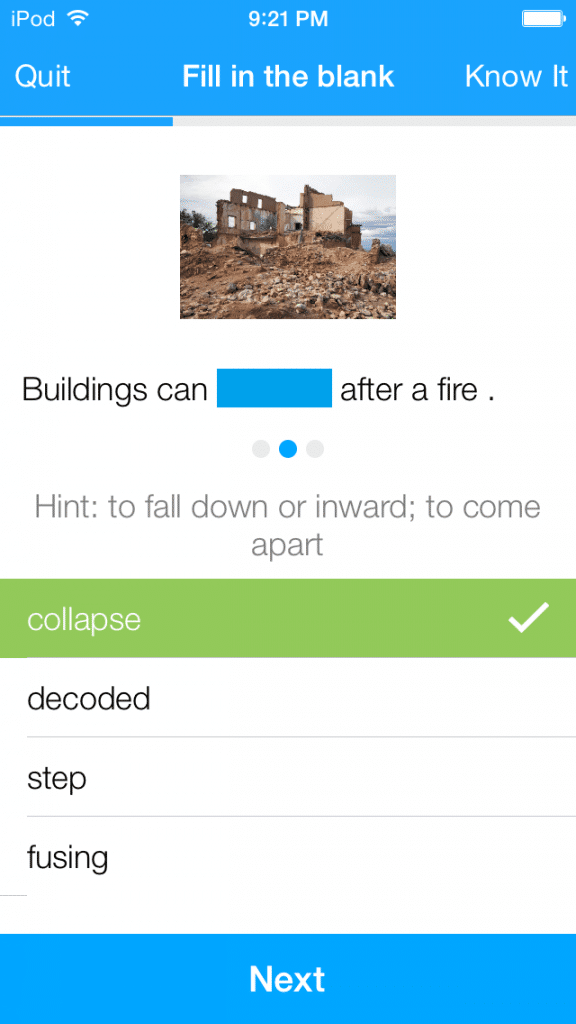 3. Learn the Flow of English.

Pronunciation is crucial, but it’s not everything. You can pronounce every individual word like a native speaker, but still not talk like one. That’s because you also need to have the right flow.

So, what exactly makes the flow of English?

One important element is “connected speech.” This refers to the way the end of one word and the beginning of the next word sometimes interact in English.

Specifically, a native speaker can:

Join two sounds. When a word ends in a consonant sound, and the following word begins with the same consonant sound, both sounds are pronounced together as one.
Example: I’d decide it later.

Link two sounds. If the first word ends with a consonant and the second word begins with a vowel, a native speaker would connect the consonant with the vowel as if they belong to one word.
Example: I’d like a fried egg.

Get rid of a sound. When the sounds “t” or “d” occur between two consonant sounds, they’ll often disappear completely from the pronunciation.
Example: See you nex(t) week!

I + am = I’m
I + will = I’ll
do + not = don’t
I + have = I’ve
I + would= I’d
You can also listen for stress and rhythm in native English speaking. Native English speakers typically raise their voices and make a longer sound for the word that needs the most attention—in other words, they “stress” the most important words.

English rhythm is the musical feature of English—the up and down of the pitch each word in a sentence takes.

Now that we know what the flow of English involves, how can we learn it?

The best way to learn the flow of English is to mimic native speakers. It’s really something you need to hear and imitate, over and over. Research indicates that sometimes we imitate others’ behavior subconsciously (without realizing it). So this might be a more natural process than you think.

For mirroring material, find a famous speech, a TED talk or a song. Rap songs are very good for this purpose. Note down how a speaker stresses different words in a sentence, which in turn leads to the distinct rhythm.

4. Use Slang When You Speak English

Slang is also usually different in different communities—so the slang in the Southern U.S. is different than the slang in England. (To see how different it can be, check out this hilarious “The Ellen DeGeneres Show” interview with the actor Hugh Laurie.)

But there are some examples of slang that a wide range of English speakers use, which you can learn. For instance:

Hang out (Spend time together)

In an informal setting, a native speaker would say “Do you wanna hang out?” instead of “Do you want to spend some time together?”

If you do hang out, the next day your friend might say, “We had a blast yesterday.” That means that he/she had a really fun time. But if he/she tells others that “you drove him/her up the wall,” that means he/she was irritated by you.

By mastering this type of slang, you’ll instantly sound more fluent and native-level. If you want to speak like an American, try these 20 essential American slang words.

Don’t try to find slang on the news or in formal speeches. Watch current TV shows or search for vlogs (video blogs) on YouTube. Because slang is regional, you should search for shows/videos set in the region whose English accent you want to speak.

As you start incorporating slang into your own communication, use Urban Dictionary or ask a native speaker to make sure you’re using it correctly.

The best way to learn slang words is to use them but remember the context. They should be used in informal settings only. 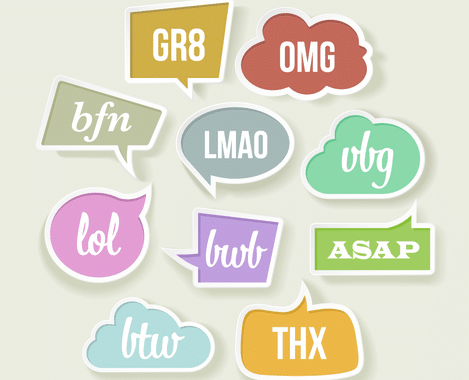 English idioms are phrases whose meanings aren’t obvious from looking at the individual words.

The use of idioms might not be as common as slang in informal speech. However, native speakers can use idioms at times and mystify you.

For example, if you’re in a meeting and your colleague says, “you can’t see the forest for the trees,” you might be confused. Your conversation has nothing to do with trees or a forest!

That’s because she’s using a common idiom. “You can’t see the forest for the trees” means you’re too involved in the details of a problem to understand the situation as a whole. Perhaps you pay too much attention to the logistic matters while not enough on the bigger issues like budget or deadlines.

Did you know that English songs are full of idioms? Check out this musical guide to English idioms. Kind of cool, right? So sing along and learn some more!

It’s also helpful to keep a diary of idioms you learn and their (possible) equivalents in your language. This can make them more memorable. You can also look up idioms in your diary if you hear one, but forget what it means.

Finally, don’t be afraid to use them! You might not have them perfectly nailed the first time but a kind native speaker might help you with the correct usage, and you’ll remember.

It’s not easy to learn English like a native speaker. In fact, it’s very hard.

However, you can start today by perfecting your pronunciation and practicing to obtain a natural flow of speech.

Don’t let slang and idioms hinder your progress. Plunge in.

Learn the spoken speech, and you’ll speak like a native speaker when you least expect it. 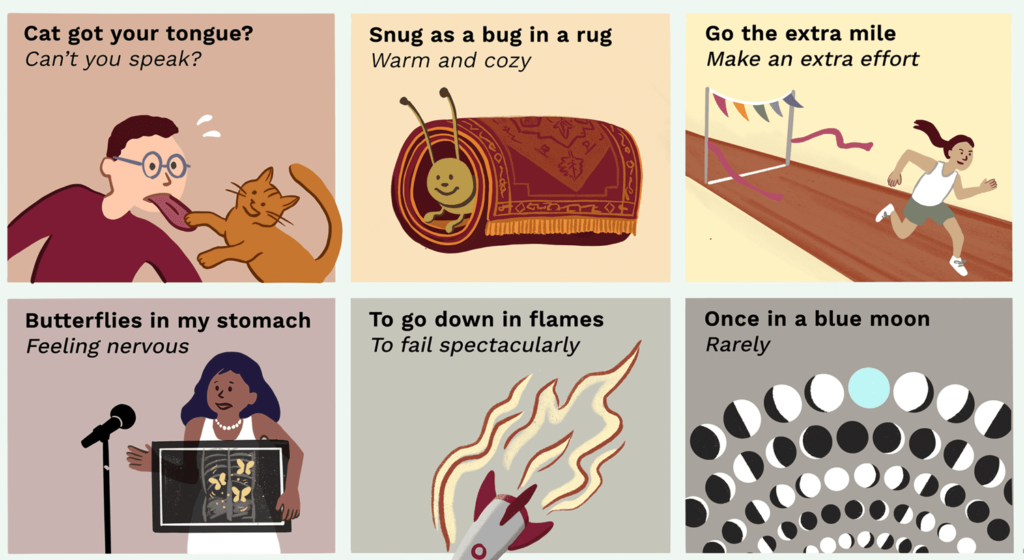 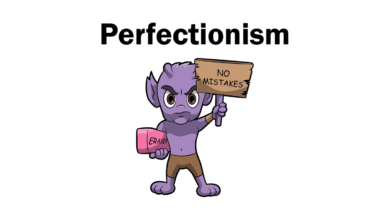 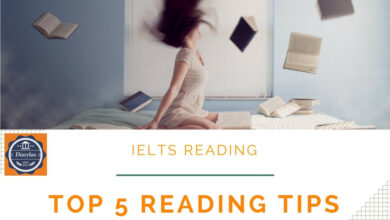 Top Tips for Scoring High on the IELTS Reading Section 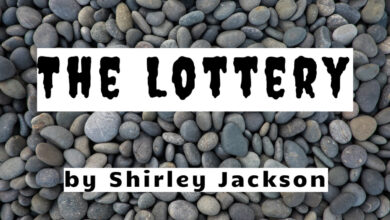